In November 2022 Kim Stryk and Jan Hartenfels join the RRG as graduate students.

Crystal lattice of co-crystal of farnesol and TBro, with details of the high resolution structure on the right-hand side. The co-crystal was readily obtained by brief heating and cooling

In February 2022 Adrian Humboldt joins the RRG as graduate student.

In November 2021 Franziska Welsch joins the RRG as graduate student.

RRG publishes paper in Nature Chemistry.
A commentary highlighting this work can be found in the same issue of the journal.
Please see our blog entry for background information and explanations.

The Richert Research Group and the Institute mourn the loss of Prof. Dr. Volker Jäger (22.09.1942 - 19.03.2021). Professor Jäger was Clemens' predecessor and chair of Organic Chemistry from 1992-2007. His sudden death is a blow to our community, of whom he continued to be a visible member. The University of Stuttgart and Organic Chemistry as a whole lost an eminent scientist and a person who will remain dear to our hearts. 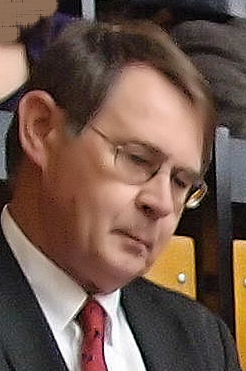 In February 2021 Tim Berking joins the RRG as graduate student.

In November 2020 Dustin Dittrich joins the RRG as graduate student.

The Richert Group, in collaboration with the Bailer Group, publishes new C-nucleoside with antiviral activity.

In October 2020 Tim Gniech joins the RRG as a graduate student.

In August 2020 Sabrina Lorenz joins the RRG as a graduate student. 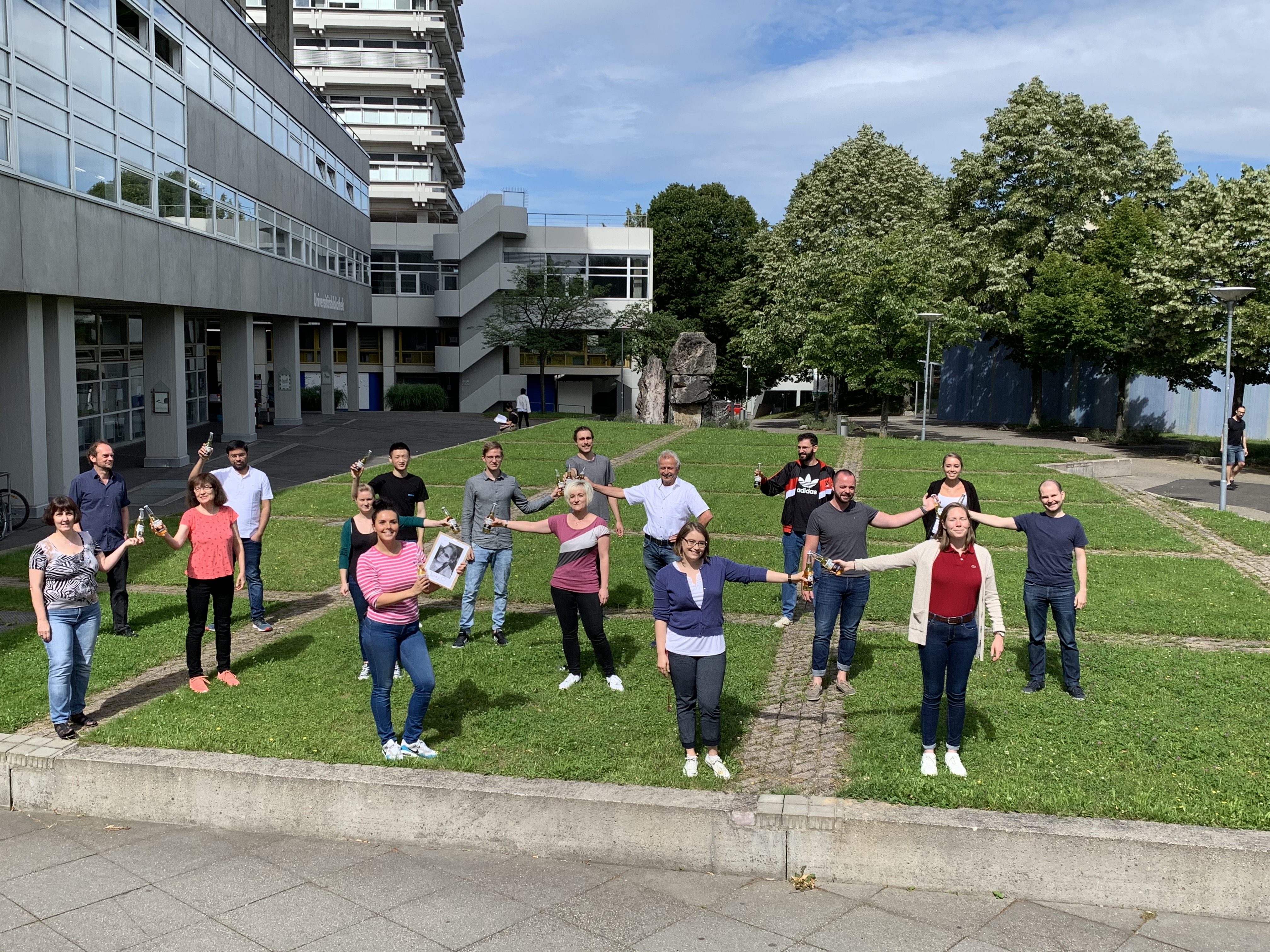 Group picture of members of the RRG in July 2020. 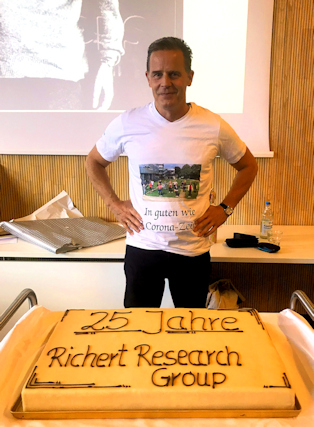 May 2020: RRG achieves breakthrough in determining the absolute configuration of small molecules.

Spring 2020: Institute of Organic Chemistry produces disinfectants for physicians in the State of Baden-Württemberg. 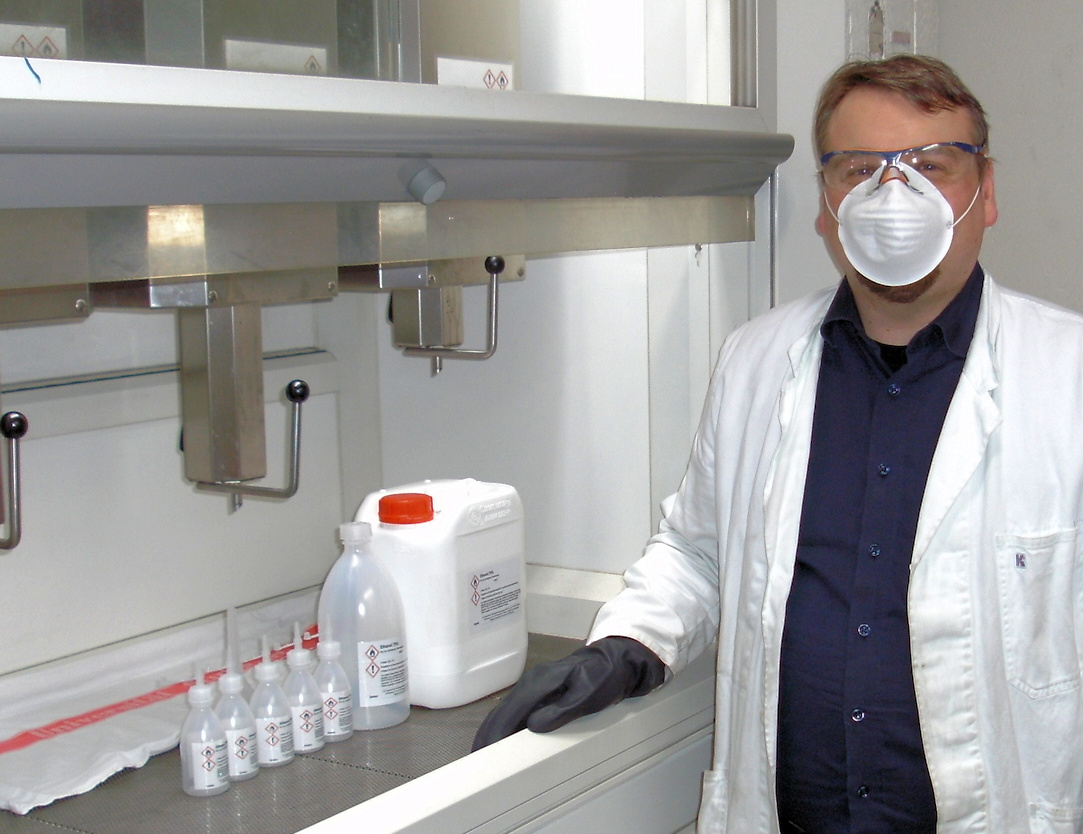 Image from our chemistry stockroom in early April.

C-Nucleoside with high affinity for adenine commercialized by Glen Research.

Impression from TOCUS 2019, Oktober 11th, at the University of Stuttgart.
Picture taken by Jennifer.

Summer 2019: The RRG welcomes Dr. Carolina Sánchez Rico as postdoctoral researcher in our labs at the University of Stuttgart.

Summer 2018: The RRG welcomes Dr. Biswarup Jash as postdoctoral researcher in our labs at the University of Stuttgart.

RRG publishes the first enzyme-free replication of genetic sequence based on nucleotides.
See link to our paper.

Spring 2018: The RRG welcomes Jacqueline Ruppert, Franka Topp, Esin Celebi and Madeleine Schwarz to perform their experimental bachelor theses in our labs as part of the Bachelor in Chemistry at the University of Stuttgart. 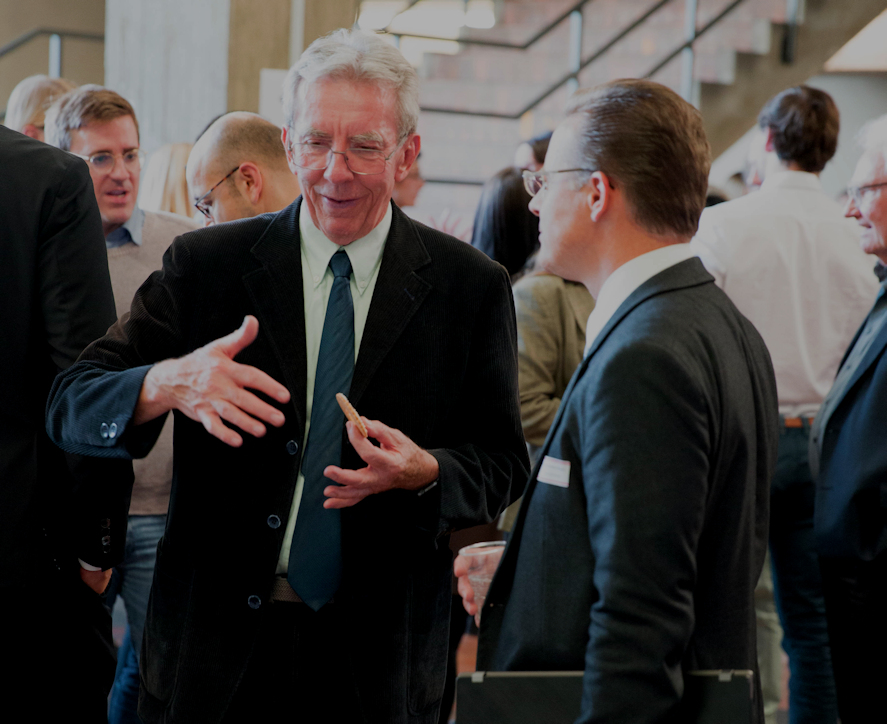 Clemens talks with Nobel laureate Jean-Pierre Sauvage during the TOCUS at U. Stuttgart in October 2017

Cover story in Angewandte Chemie on reagents with a crystalline coat.
Link to the paper 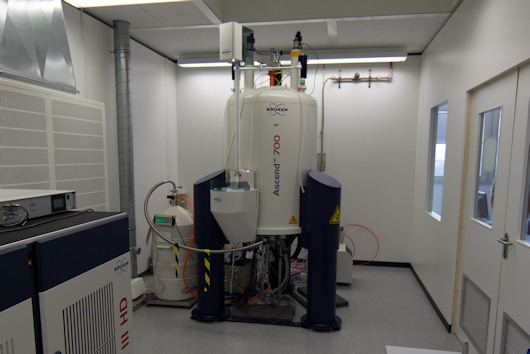 The instrument includes a cryogenic probe and was purchased with funding from DFG. Clemens was the coordinator of the multi-PI proposal with help from Dr. Birgit Claasen.
The instrument is in newly renovated and air-conditioned space in our building. 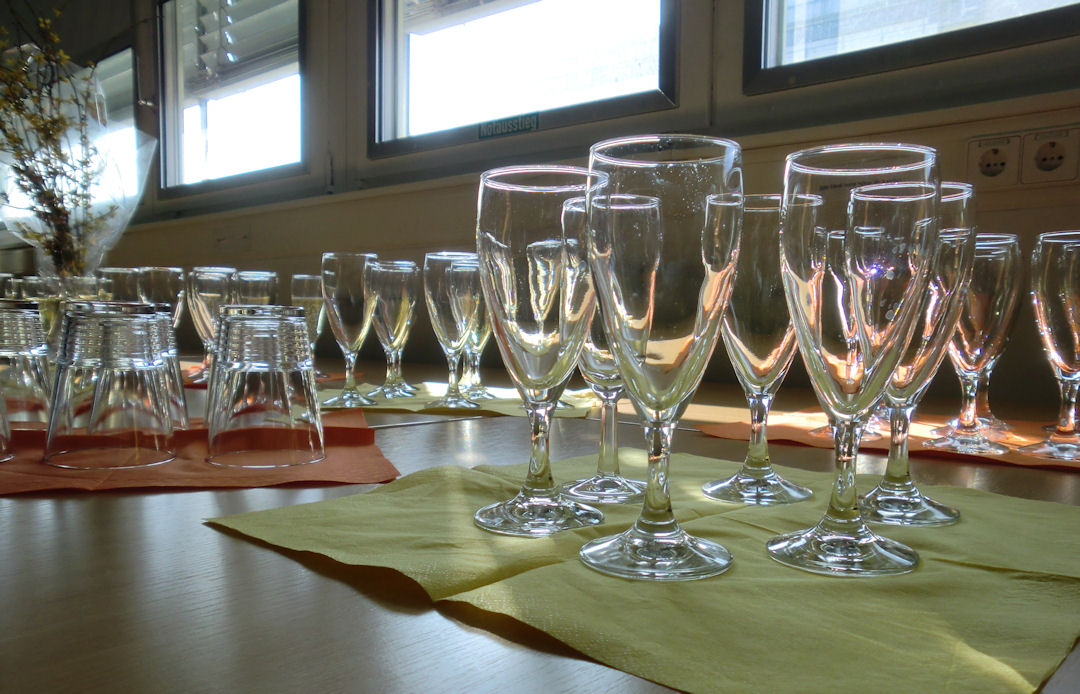 Pictures from the retirement farewell celebration for Mrs. Kraschewski-Fien March 2014. 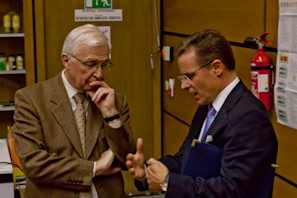 Clemens talks shop with Nobel laureate Jean-Marie Lehn during the TOCUS meeting at U. Stuttgart in October 2013.

Mrs. Kraschewski-Fien celebrates 40 years of service at the University of Stuttgart. Congratulations from the RRG! (Oktober 2013)

Andreas has been selected as one of the finalists for the 2013 Reaxys PhD Prize. (July 2013)

Paper on primer extension with reversible termination highlighted in press release and as back cover of Angewandte Chemie.


Paper on RNA copying published in Nature Chemistry. See link to our paper. The report is the culimination of five years of research, largely performed by Christopher, who never gave up when it came to demonstrating that RNA can do it all by itself.

Spring/summer 2011: The RRG welcomes the first four students to perform their experimental bachelor theses in our labs as part of the new Bachelor in Chemistry at the University of Stuttgart.

The Centre for Higher Education Development (CHE) ranked departments and universities in Europe. Chemistry at the University of Stuttgart was ranked in the top group. See

Welcome to our renovated labs 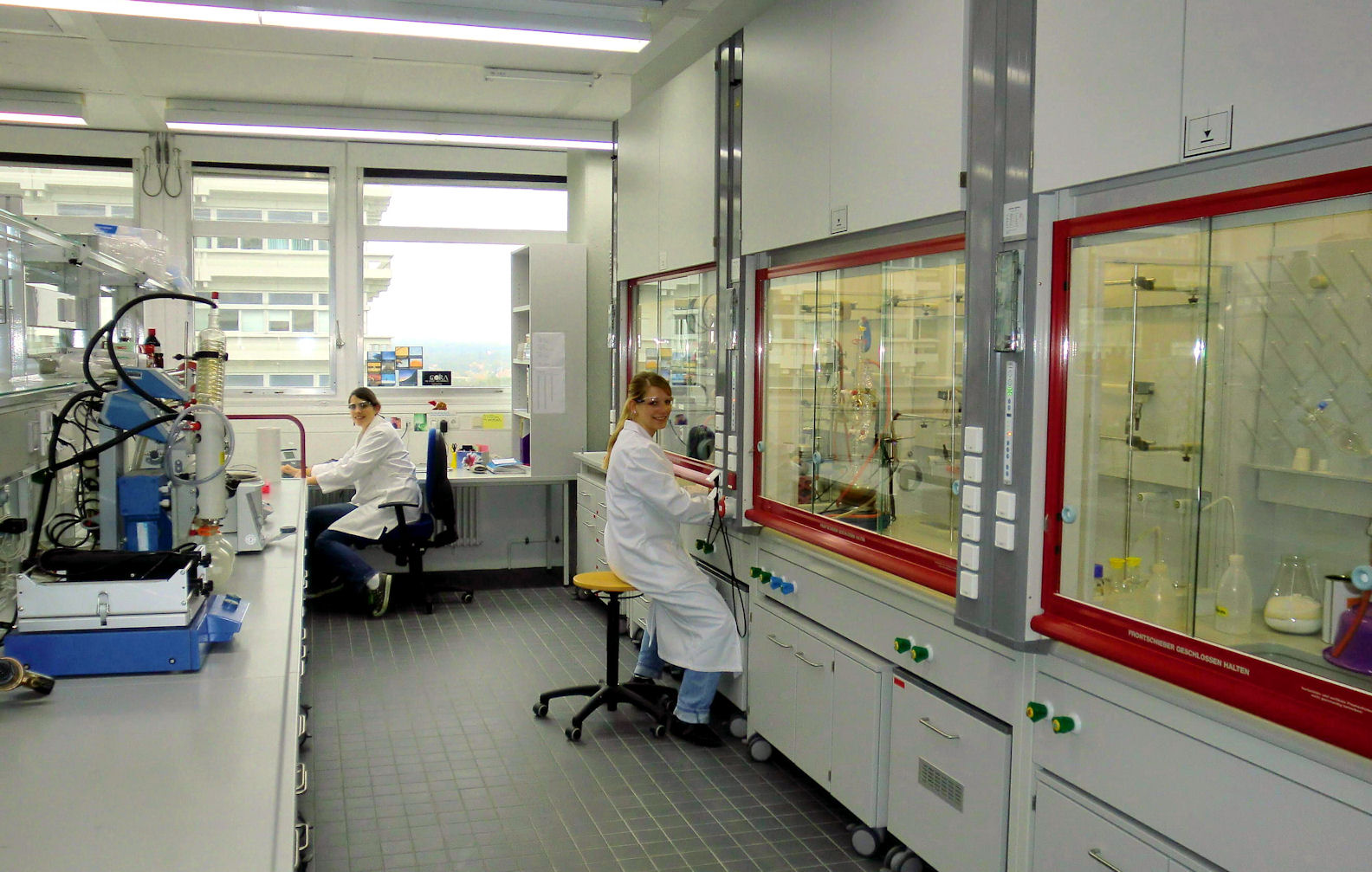 The first renovated labs at U. Stuttgart were opened for research on September 28, 2010. The picture shows Cora and Heike at work. 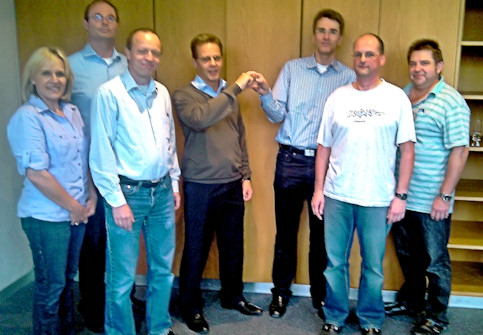 Clemens hands over the keys to the Karlsruhe labs to his successor Achim Wagenknecht on September 24, 2010.

Paper on templating efficiency of DNA published in PNAS

Our paper entitled "Templating efficiency of naked DNA" appeared in the Proceeding of the National Academy of Sciences USA;

Link to Paper and press release.

Our paper entitled "Chemical primer extension at submillimolar concentration of deoxynucleotides" by Manuel and Clemens was selected as Featured Article and cover (issue 12, 2010) of JOC (DOI: 10.1021/jo1002467).

Richert Group Hosting Symposium in May 2010

at the IBZ Center in Stuttgart, Germany.

oc.uni-stuttgart.de for reservations and details.

Click here to view the article by Amritraj Patra and Clemens Richert in J. Am. Chem. Soc. 2009.

The Richert Research Group is moving!

The Richert Research Group proudly announces its move to the University of Stuttgart.

Ulrich Plutowski was selected as finalist for the DSM Science and Technology Award 2007.

Pictures from our April 2007 retreat online

Pictures taken at our recent retreat and during the 2006 holiday party are now online.

A recent publication in Chemical communications on spontaneous replication steps of RNA has been selected for presentation as "hot paper":
M. Spencelayh, RNA on ice. RSC Chemical Biolology, 2007, 2, B41 (cover story).

The 2006 Nucleinsäurechemietreffen will be held at the University of Göttingen on September 22, 2006.

Additions to the Richert Research Group

Starting February 2005, four high school students from the greater Karlsruhe area are engaged in research projects offered by the Richert Group. The four were selected from a large pool of applicants by a committee in the Institute of Organic Chemistry. A secon group of students is pursuing research in the Podlech Group.

Pictures from our March 2005 retreat online

A compilation of pictures taken at our recent retreat can now be viewed online.

Additions to the Richert Research Group